Last post by TommyThunderGM - January 25, 2021, 10:02:50 pm
James Wiseman -  Just everything you could want with a big man. Bonkers Athletic traits and size, offensive and defensive talent where it matters most, and rebounding skills to round it out. A sure fire top end prospect and likely future perennial all-star.

Onyeka Okongwu - Similar to Wiseman, but with a bit of a height issue. A championship level player to add to a winning roster. Okongwu likely won't be your top dog, but makes a good second banana. His defensive and rebounding attributes are gorgeous and are met with an equal level of athleticism. Without Wiseman, who is all-worldly, Okongwu is the #1 talent in most drafts.

Lamelo Ball - A 6'7 Point Guard. That's the pitch. I am really looking forward to seeing where Ball lands, and I think a Jumbo PG with marvelous offensive potential has the chance to take this league by storm. You will certainly need to stash a stopper next to him, but he has enough offensive juice to make this worth it.

Anthony Edwards - An athletic freak with offensive juice, Edwards may be the best offensive player in the draft. With a Plus TC, he's among the best players in the league if that defensive rating rises.

Patrick Williams - Athleticism, Defense, and fine offense. The sure fire makings of a color bait forward who gets paid throughout his days. I can't ignore the potential, but am concerned about the floor.

Jaden McDaniels -  The 2nd most interesting player in the draft? A swiss army knife at 6'10 who can guard both the perimeter and the paint. The offensive skill set is juicy as well. Could see him popping up as the best guy in the draft.

Isaac Okoro - Similar to his nba profile, Okoro will never be a leading scorer but will fill out a starting backcourt strongly. Should have a lower usage than most and defend the shit out of the ball. A winning player, but not an offensive threat.

Killian Hayes - Another taller point guard, who is basically Lamelo light. His defense is better for sure, but I don't think the offensive ceiling is there and he is 2 inches shorter, which has no impact on their ability to block shots, logically.

Cole Anthony - The best traditional point guard in the draft, has all of the traits you look for in your lead ball handler. I wish the athleticism was a little better and the steals were there, but he'll lead a mid tier team for a stretch of time.

Devin Vassell - Your typical 3 and D 2-Guard, a dime a dozen in this league. He can be special if he pops in TC, but probably will be a league average starter.
Obi Toppin - The ultimate high floor, low ceiling guy. He's going to score because he's really good at it and he's athletic as fuqqqq. The defense leaves a lot to be desired. I think that means empty stats on a bad team and then MLE on a championship one.

Isaiah Stewart - He does pretty much everything you could want out of a big, so he'll likely go higher than this. I predict the Augustine Watkins memorial #8 spot. The post defense is a bit disappointing and dips his stock for me.

Poku - I mean he's the 7'0 Point Gawd. I think he has about a 99% chance of failure and all the signs point that way, but it's so intriguing. I won't draft him because I'm soft as baby shit, but look forward to his development arc. Bon Voyage to the Bucks.

Josh Green - More defense, than threesense, I think Green will be a valuable bench contributor for a good team. 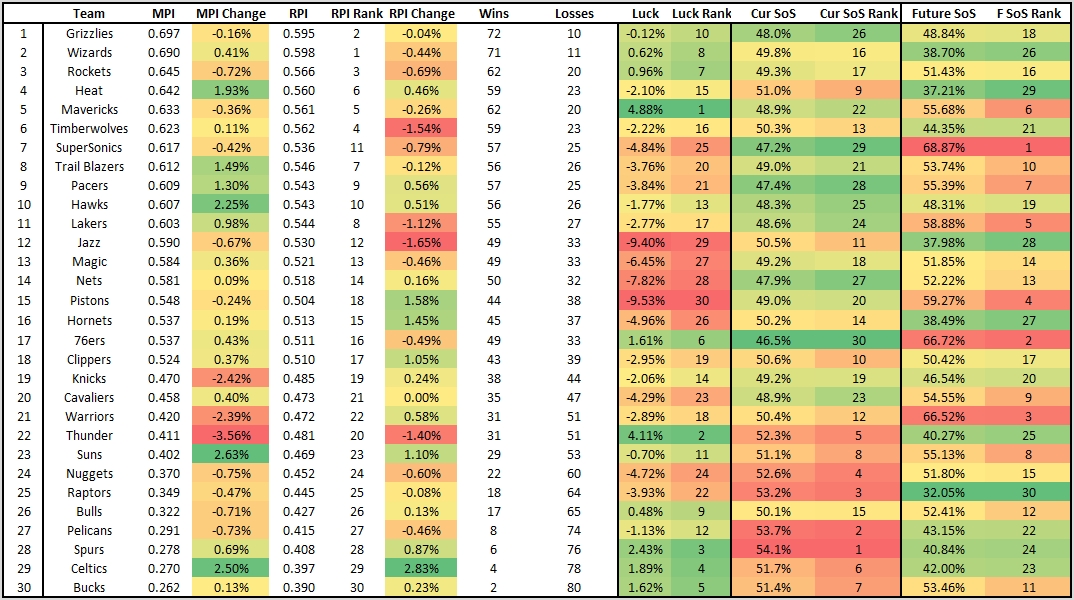 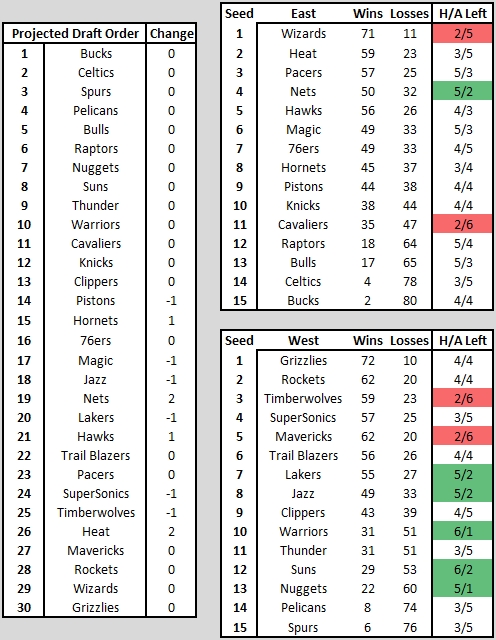 Tie Breaker Scenarios
Heat v Pacers v Hawks - Pacers based off being a Division Winner over either Heat or Hawks. Heat have H2H over Hawks thanks to 4-0 H2H.

Magic v 76ers or Nets - Magic currently have 2-1 H2H over Philly but one game remains in Orlando. Magic own H2H over the Nets as well.